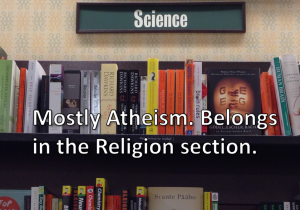 Con: I was not raised in any faith and I have never had any strong belief in any higher being

Pro: Theism or a-theism is not what defines a religion – see Buddhism, Jainism, etc.  Religion is just the sum of axiomatic beliefs one holds. And you do hold axiomatic beliefs. Everyone does.

Con: If I were to claim: “there is no God nor gods and the entire concept is a psychological fantasy…”

Pro: Atheists do that a lot. Who cares? Disputing beliefs is foolish. But there’s a huge difference between acknowledged beliefs (religion) and something claimed as fact. “Facts” can and should be disputed.

Con: “People tell religious fairy stories to create meaning, but I’d rather face up to what all the evidence suggests is the scientific truth”

Pro: This summarizes how delusional atheists are. In fact, atheists are just as religious as anyone else – they got no choice as Science = Observable + Religion. What atheist doesn’t like Star Trek, Harry Potter, Darwin’s tall tales and other Hollywood productions illustrating their creation myths?

Con: Atheists do not believe in the supernatural.

Pro: The word supernatural has no meaning as we don’t know the limits of the natural. Nuclear energy would have been “supernatural” as late as 1900 but very much “natural” in 1950. And what can be more “supernatural” than the belief in the arising of everything (universe, galaxies, life, species, intelligence, AI, and more) for no reason and without a shred of evidence? Other meaningless words are “skeptic” (aren’t we all about others’ ideas?), “nonbeliever” (everyone believes in something), “freethinker” (we all claim individualism), “dogmatic” (whoever accepts they are dogmatic?), “progressive” (people oppose “progress”, not progress), etc.

Con: Atheism is not a religion.

Pro: Sure, atheists “are not a religion” just like alcoholics that “don’t have a drinking problem”.

Con: Atheism is just Science.
Pro: Atheism doesn’t own Science. As shown here, Science is a composite of Observable (which we more or less all agree on) and Belief (Religion) based interpretation and extrapolation of the Observable.

Con: But where does God come from?
Pro: This is like asking: how much infinite plus one is? Infinite, of course. Regardless, this question and answer is a matter of pure Belief (Religion).

Con: Atheism is a religion like …bald is a hair color and …not collecting stamps is a hobby.
Pro: This would be true if atheism didn’t take a position. But atheists have a Belief System (Religion) like everyone else. You can live content without hair or hobby, but not without a Belief System. The argument is not about a little corner of the universe, but about the universe itself. Furthermore, atheists are not just absent/neutral/unconcerned/unknowing, but they actively deny God. The active position is justified only by a competing Belief System (Religion).

Con: I find the explanations on offer by religion to be unconvincing and unnecessary. When you tell me we need to posit God to explain the creation of the universe you have substituted two things I don’t understand for one. Maybe I should posit a Supergod who created the universe creating God to solve this.
Pro: God is infinite – check your math: infinite + 1 = infinite; infinite + infinite = infinite; infinite – infinite = infinite; etc. There is no superlative of God (infinite). Indeed, some infinite sets can be larger than other infinite sets, but just because a set containing both A and B is larger than another set containing just A, doesn’t mean that B is greater than A.

Con: We all need to act on faith in the best evidence we can find. That doesn’t mean it makes sense to call every belief system a religion.
Pro: Western atheists generally resist being called religious, although they have no problem recognizing Eastern atheists like Buddhists and Jainists as religious.

Con: We are born atheists. Religion is a self perpetuating unnecessary addition.
Pro: Animals too respect the powers of Nature. All humans have a form of religion from the most primitive to the most advanced. Atheist do believe unconditionally in the Laws of Nature, Science, Reason, and various philosophies – all these beliefs make the atheistic religion. Children discover religion as soon as they starts asking existential questions.