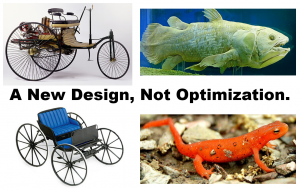 “Natural selection” proponents must answer these simple questions – pick any biologic entity including populations and give the 80/20 Pareto without too much accuracy or precision :

Con: Chemists could say rocks DO “select” each other as in “bubbles go up and dust settles down”.

Pro:  Yes, “bubbles go up and dust settles down” and chemicals react with particular other chemicals because something else causes that, not because they “select” each other.

Pro:  Survival of descendants is the ONLY thing out there, not “fit”, not “best adapted”, not “selection”, not “beneficial mutations”. To see this, imagine an experiment where you want to determine one of those four without any information whatsoever about survival of descendants. Can you? No way! Even the improperly called “artificial selection” does not become effective until survival is affected. Until then it’s just an empty declaration of intent.

Pro:  Sickle cell occurrence of 10-40%, in equatorial countries of Africa is not “selection”. Even 100% occurrence would not be selection of any kind. Who/how/whom would be selected? The malaria doesn’t select, the mosquitoes do not select and humans do not select. What selection are you then talking about? How would you even test “a survival advantage”? Compared to what? Remember that 60-90% of the population in those areas does not have sickle cell and they survive.

Pro:  Antibiotic resistance is only subject to intelligent selection (itself or the defending organism) and is fully reversible when the stimulus is removed. It is also impotent in transforming those bacteria into any other organisms. Both antibiotics and antibiotic resistance are part of the biologic arsenal together with other BUILT IN adaptation capabilities like appearance, metabolism, etc. They are all limited in scope and reversible when the triggering stimulus is removed. No “divergence of character” seen. Sickle cell is a trade-off mutation like all mutations. When you examine closely, you see no such thing as “beneficial mutations”. I don’t know the true story of the “nylon eating bacteria”, but I bet that’s a trade off mutation also. Same goes for Lenski’s citrate eating eColi. Just mix these with the general population and remove the stimulus and you should see these trait disappear rather than spread to the whole population as promised by Darwin. Who knew “evolution” was testable? The Darwinist trick revealed: it’s a known fact that the human brain has a tendency to make up “explanatory” stories for past events. But the predictive power of Darwinism is zero. I give you three phenotypes. Which one will survive? You don’t know prospectively but you do know retrospectively. Only retrospectively. Always. Keep in mind the chicken flu can hit too, and then none may survive on the farm. It’s always retrospective!

Pro: This definition fares no better as we’re all different and some survive making “differential reproductive success” an irrelevant triviality, the environment and other factors such as epidemics that can wipe out the population are left out, and “causally correlated” has to be independently confirmed since correlation cannot infer causality (and once causality is known then correlation becomes more or less irrelevant). Also aside from very specialized labs, all others select on phenotype, not on genotype.

Con: Why are definitions so important to you?

Pro: It’s not about accuracy. Take the zebra stripes – just one element of the infinity of their phenotype – yet we’re still guessing why: https://www.livescience.com/49447-zebras-stripes-cooling.html . Are the stripes essential to survival? If not, what other phenotype elements matter to zebra survival? Would they survive somewhere in South America? Where? Would a horse survive where zebras live? What kind of horse? You must agree we can’t say anything about how and why the zebra phenotype happened. Also you can’t say anything about their “fitness” and what would change their “fitness” and how much. More or less, all you can do is observe they survive. No! You can’t “estimate all those things closely enough for practical purposes”.

Con: What about organic design? Isn’t that natural selection at work? More and even more.

Pro: No. This is just iterative optimization of a given design. In this case, the wing shape, the material, the environmental forces and the optimization target are all given. The algorithm will not generate a new wing shape or material and it will stop converging as soon as the environment is less than perfectly defined. In addition, this design is radically different from the previous one, and the next iteration will certainly be radically different than this one (no gradualism).