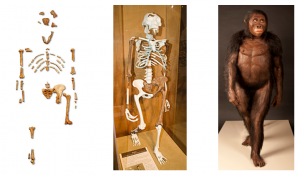 Con: What about the phylogenic tree derived from metabolic enzymes matching the morphologic tree?

Pro: Read about hypothesis testing. What you’re describing is not it (it’s just curve fitting). Furthermore, this would be like third and forth-order evidence and an argument from ignorance when in fact we have second-order evidence as shown in this OP and elsewhere (first-order would be direct observation which is missing).

Con: What makes hominids distinct is our ability and willingness to cooperate.

Pro: That’s another “just so” story (without justification): a. Compare to other social animals and learn this is a random “explanation”, b. There’s no link between “social” and intelligence, dexterity, bipedalism, hairlessness, etc., c. When a group of apes “decides” to become social, either they all become social or the less social die out, d. If turning social would be feasible, we would see grades of social development among chimps, etc. and then also grades of bipedalism, etc. – see b.

Con: Evolutionary analyses show the very same degree of divergence in other lineages as between humans and chimps.

Pro: There are way too many unique human characteristics and they all supposedly appeared in a timeframe in which all other comparable organisms have remained virtually unchanged. Where is the outstandingly handy feline? The biped canine? The talking seal? The superintelligent bear? And where is another family with another member that combined ALL these characteristics and more while its relatives remained ordinary?

Con: Evolutionary analyses show the very same degree of divergence in other lineages.

Pro: Not at all. There is absolutely no animal family with so many and extreme differences between one member and all others: Dexterity, Lifespan, Speech, Bipedalism, Hairlessness, Diet, and – most importantly – Superintelligence.

Con: The various Homo species diverged from the chimp lineage while living in separate habitats. We both survived because we occupied different ecological niches.

Pro: There’s no evidence for this. Like humans, chimps live successfully in rainforests, humid and dry forests, wet savannas, wooded savannas, and sometimes in grasslands and shrub-lands. As omnivores we always had similar diets (environment allowing) which we also share with bears, monkeys, and many other omnivores. We all gladly share environments and seek one another’s food. A comparative analysis with other animal families like felines and canines shows that human “evolution” is simply not justified on the basis of “niche specialization” especially when all other supposed branches remained virtually unchanged.

Con: Humans are just the first species to reach this level. Something has to be the first at something.

Pro: And who will be second? Dolphins? Are they painting underwater caves already?

Con: Both chimps & humans had a common hominid ancestor some 5 mill. yrs ago

Pro: Even with the Hollywood artistic license, this 25 mya looks just like a chimp today: https://www.livescience.com/32029-oldest-monkey-fossil-found.html. See? No evolution.