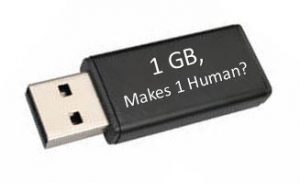 For a long time, and way before the discovery of its structure, DNA has been considered “essence of life”, the molecule that defines every organism including humans and that links ancestors with descendants over generations. Associations between DNA and heredity as well as between DNA and various hereditary traits have only enforced this view. Genetic code similarity between humans and other organisms seems to substantiate the tree of life and the story of evolution since we’re 99% chimps, 69% rats and 50% bananas according to the DNA. Recent computer developments lead us to the analogy between the DNA code and programming.

Is DNA essence of life? Are our development, appearance, behavior, and diseases pre-programmed in our DNA? Many connections have certainly been observed, but DNA is far from organism determinism. The information carried by the 3 billion base pairs of DNA nucleotides – each containing 2 bits of information (ACGT) – in the human genome amounts to only 6 G-bit of data which is less than 1 G-Byte (fits easily on a thumb drive). This is hardly enough to capture the complete manufacturing specifications for the simplest products around us like a pencil or a tire. Moderately complex systems like cars and airplane require a lot more data than available in a genome, and even that information is for high level recipes rather than complete (from atoms and simple molecules) instruction manuals.

A bit is a bit is a bit whether magnetic, silicone or DNA nucleotide. Some bits may certainly carry more important information than others, but only to the extent they link (index) to other information. “Fetch the human” can be encoded in a single bit if the only alternative is “fetch the chimp”. “Assemble or Fix a human” as in “transplant into a dying patient a cadaver hart” on the other hand requires a lot more information if this is to be carried out by a transplant surgeon in training – in fact this is the kind of information that may require on the order of Gigabytes in teaching materials. “Make a human” as “…from one zygote and the available atoms and molecules” is the type of request that demands an unknown number of bits, for certainly exceeding by many times the 1 GB of data available in the zygote’s DNA.

Is DNA a simple recipe rather than a complex blueprint? “A bread recipe is short and not a complex blueprint, but instead it prescribes the ingredients and the sequence in which they should be processed”. Of course, but the recipe also assumes an intelligent baker capable of carrying out the recipe. And most bakers already know the recipe – a single bit (“make one bread” = true) should suffice. But the “DNA as recipe” supporters do not like intelligent agents, so can the bread be done without a baker? Of course again – fully automated industrial bakeries are feasible if not yet reality. However, now the recipe explodes with information – how to design and operate the feeders, mixers, conveyors, ovens, packaging, etc. The 1 GB of DNA is utterly insufficient for the task (and baking bread is not developing a human!). And what about the whole supply chain for the bread – flour, yeast, energy, and more? Organisms have complex circulatory and respiratory systems just to ensure the oxygen reaches the cells in a precise, usable form. The simple recipe is anything but simple.

Can the differences between humans and chimps be fully described in 8 MB of data? Scientific presentations that don’t even begin to scratch the surface of this topic take more than that computer storage space. Furthermore, 0.5% of our genome separates us from other humans while 1.2% separate us from bonobos and chimps. The implication is that our differences are more than skin-deep and cannot be explained by our similar genotype. The co-evolution story of chimps and humans that, given our similar genome, seemed plausible for a while, becomes much harder to accept if the genome is far less important than thought.

If not in DNA, then where exactly is the actual human blueprint? We do not have any strong leads, but we do know that even genetic twins are somewhat different, that epigenetics play a role, that some information is encoded chemically (as in redox reactions and DNA PCR), and that environment and the maternal womb are critical. None of these is a sufficient explanation however. Chemistry is common to all organisms, the environment can vary drastically without affecting the outcome that much (homeostasis), and the maternal womb is itself an outcome of a previous development.

What are the implications of ‘DNA not essence of life’? Most important (as discussed) is that DNA fails to support the assertion that humans are apes, and that we need to seriously begin searching for this ‘essence of life’ somewhere else. Of smaller importance, DNA-centered efforts to revive extinct species will be much harder than currently expected as will be chimera hybridization, and abiogenesis attempts currently focused on DNA and RNA.

While DNA is too small to specify an organism, protein are generally too long to be obtained by random trial of all possible amino-acid combinations. The typical eukaryote protein is 438 amino-acids residues long. A smaller 150 residues long protein is one of 10 to the power of 195 different possible combinations of residues, making any random search for a protein (as imagined by Darwin’s followers) quasi impossible as others have observed (Douglas Axe, and Stephen C. Meyer).

Pro: To build a “phylogenetic tree” one has to PRESUPPOSE “evolution” (circular logic). Furthermore, anatomy is not independent of biochemistry? Your source claims: “Netscape works essentially the same on a Macintosh, an IBM, or a Unix machine, but the binary code for each program is quite different”, but this is obviously wrong as: a) We’re likely not dealing with multiple designers; b) “Binary code” is for sure not the equivalent of DNA

Con: DNA is the only thing that is inherited.

Pro: If so, why have any conventional information in the DNA and why just a tiny bit of it? Also, the molecular information is generic (as in 2 H2 + O2 = 2 H2O always) so this would not explain the diversity of organisms. In addition, information is valuable only to specific, intelligent users. Of two Flash memories with exactly the same mix of protons, neutrons and electron, but one containing random bits and the other containing specific data, only the second has valuable information to the user.

Con: Isn’t DNA more analog and that’s why we get so many skin colors?

Pro: Skin color is determined by many genes and that’s why it appears continuous. Like length, width, height, etc. it’s not intrinsic to biology but a property of all objects. In biology, color changes from birth to maturity and depending on the environment.

Con: What about data compression. DNA can do a lot more than computer code.

Pro: No. Computer code is always compressed. In DNA, 64 bits (3 nucleotides) select 20 aminoacids – an example of inefficient compression. In addition, some proteins require thousands of nucleotides to encode.

Con: DNA is not code as it is impacted by the environment through its 3D structure and chemical composition.

Pro: DNA is information – just look at all the genetic diseases, companies like 23andme, and cancer research focused on DNA nucleotide values in specific places. We are all born fully-formed humans and not half-monkeys, half-rats, or half-bananas. That is also true at all development stages. So we start with a zygote and the maternal womb – a protected environment and end up with a human – that’s Manufacturing, Hardware, and Software. And the maternal womb is itself a product of another zygote and another womb. So no, 3D structure, hydrogen bonds, epigenetics, and whatnot don’t matter so much at that stage.